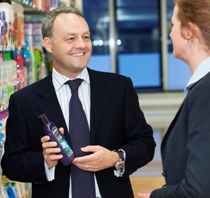 Unilever has 30,000 employees in Europe, which includes 2,000 managers, and all of them report to Jan. Sales are 12 billion Euro a year. Jan’s job involves travelling all over Europe  selling the company’s world famous brands – Magnum, Dove, Sunsilk, Persil, Rexona, Streets – to name but a few.

“It’s a huge thrill to be able to go into different countries and cultures, not as a tourist but as an operator in the society you are visiting and as a leader,” says Jan whose home base is Unilever’s European HQ in Rotterdam.

“It’s a very big, global company,” says Jan.  “We are everywhere.  We sell real, normal products used by everyone on the planet.  We are a company with good values, honest, very multicultural with meritocracy and sustainability at the heart of our business.”

Jan’s parents emigrated from the Netherlands to New Zealand in 1979 when he was 15.  The family settled in Kerikeri in the Bay of Islands.  Jan went to Kerikeri High and had no intention of going to university.  He wanted to go straight into business.  But then Waikato University visited the school, talked about what they offered and Jan was impressed.  So impressed he signed up immediately for a Bachelor of Management Studies.

“It sounded like the broadest, best business degree and the fact it was four years was a differentiator,” says Jan who also particularly liked the Waikato campus. “Waikato had one of the best reputations as a business school and it also offered a practical period. The degree gave me an entry ticket into a good starting job at a respected and large company where I could learn more and have plenty of job growth opportunities.”

Jan graduated in 1987 and joined Unilever as a brand manager.  From there he gradually moved up the company’s global ladder in Australia, the Netherlands, Italy, Sweden, Dubai, Iran, North Africa and South East Asia.  He was appointed to his current role earlier this year.

Jan says the most satisfying aspect of his job is the impact on the business and people, making things better than he found them.  “In deep rural villages, huge metropolitan cities or slums – it’s interesting, challenging and fun.”