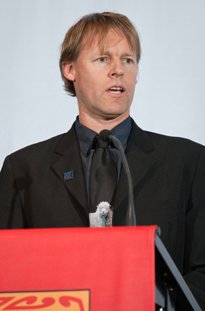 A campaigner for peace education and against nuclear weapons, Alyn Ware is a University of Waikato 2009 Distinguished Alumni awardee.

Alyn Ware, the global coordinator for Parliamentarians for Nuclear Non-Proliferation and Disarmament, graduated from the University of Waikato in 1984 with a Bachelor of Education and a Diploma in Kindergarten Teaching.

He says news of the honour came as a surprise. "Too often peace is misunderstood as merely the absence of war and thus is not sufficiently publicised or celebrated," Mr Ware says.

"This award can help people understand that peace involves practical ways to solve conflicts and prevent violence at home, school, in the community or internationally, and that it comes from skills that can be taught, attitudes that can be learned, and behaviours that can be changed."

Previous awards for the Tauranga native have included the UN International Year for Peace Award in 1986; the Winston Churchill Memorial Trust Award (Aotearoa-New Zealand) in 1986; and the Alliance for Nuclear Accountability Award (USA) in 1997.

Former Minister for Disarmament and Arms Control, Matt Robson endorsed Mr Ware's nomination, saying he has always called upon Mr Ware's advice as a world expert on disarmament. "He is sought after as an adviser right up to the Secretary-General of the United Nations," Mr Robson says.