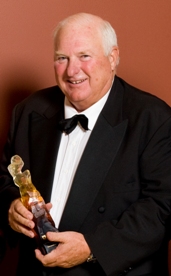 The University of Waikato, in 2008, bestowed a prestigious Distinguished Alumni Award on Peter Vela ONZM in recognition of his roles as business owner and founder of key regional enterprises.

Graduating in 1973 with a Masters in Social Sciences, Peter Vela is a highly regarded businessman who maintains a relatively low profile despite his leading role in New Zealand's thoroughbred breeding, bloodstock and fishing industries.

Vela Fishing, which is based on three generations' experience in the fishing industry, holds the largest privately-owned government fishing quota and has worked closely with other New Zealand companies to develop export markets for New Zealand seafood products.

With his brother Philip, Peter bought New Zealand bloodstock in 1997 and has overseen the growth of the Karaka-based business into one of the most highly-regarded bloodstock auction houses in the world. While it attracts top international owners, buyers and breeders, it also serves the needs of local, hobby and small-time breeders.

Peter is also co-owner of Pencarrow Stud situated just outside Hamilton and over the years has bred a string of high-value winners. He has served on various racing boards and in 2002 was named an Officer of the New Zealand Order of Merit for his services to the racing and bloodstock industries.

Peter Vela is pre-eminent in his chosen fields and has made outstanding contributions to New Zealand in a dignified and professional way. He is committed to New Zealand's profitable bloodstock industry and in maintaining its high reputation throughout the international racing world. He continues to look for new and innovative ways to improve the country's fishing industry while ensuring its sustainability and long term viability.

Peter received a knighthood in the 2014 New Years Honours list.