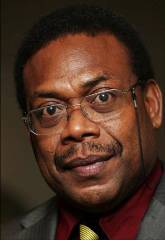 In 2008 Hon Dr Derek Sikua, then Prime Minister of the Solomon Islands, received a Distinguished Alumni Award from the University of Waikato acknowledging his commitment to teacher education and the critical contribution he has made to education in the Solomon Islands.

Graduating in 2003 with a PhD in education, Dr Sikua is both a distinguished educationalist and politician.

He held the most senior position in education in the Solomon Islands, Secretary for Education, when he took leave to become a mature student at the University of Waikato.  His thesis was an investigation of the community high school initiative in the Solomon Islands, a development that allowed a much higher percentage of children access to secondary education and in particular ensured an increased percentage of girls in secondary studies.

During his time at Waikato, Derek Sikua was a leader among Solomon students and mentored a number of younger colleagues.  His successful completion of his thesis was a tribute to his persistence and dedication, given the troubles in his homeland and the fact that he wrote his thesis in English - his fourth language.

Following his return to the Solomon Islands, Dr Sikua stood for parliament where he became Minister of Education.  His forward-looking strategic approach saw him ensuring the provision of training for almost 2,000 untrained teachers.  He was instrumental in proposing and designing the project to build capacity in teacher education for the Solomon Islands.  He was consistently supportive of the work carried out by the University of Waikato through its contract with NZAID, using this to continue addressing the issue of untrained teachers.

As well as a doctorate from Waikato, Dr Sikua holds a Master of Educational Policy and Administration from Monash University, and a Bachelor of Education from the University of Southern Queensland, both in Australia.